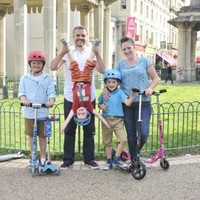 Mark
Mark is one of the members of our customer service team. He has an encyclopaedic mind for detail, loves helping people choose their scooters and is the self-nominated first tester of any new electric scooters we release.

Especially when you are on it.

In a survey of 2,000 inventors the founder of Micro Mobility Wim Ouboter was ranked number……..

Our very own Wim Ouboter who came up with the design for a folding Micro scooter because he wanted to go to his favourite sausage shop. Said sausage shop was too far for him to walk and too short to drive. And so the story began.

Richard James the inventor of the Slinky